Asia Cup 2022 Schedule, Fixture, Teams, Venue, Date, Squads, Live Telecast, Streaming all you need to know: The ICC Asia Cup Schedule 2022 has been confirmed for all 13 T20 matches as the 15th edition of the tournament will start on August 27, 2022, in UAE. A change has also been made in the venue of the tournament from Sri Lanka to the United Arab Emirates (UAE) following an announcement from the Asian Cricket Council (ACC) that Sri Lanka Cricket (SLC) would be hosting the event in the United Arab Emirates.

A complete schedule of all the T20 matches scheduled to take place during the Asia Cup can be found below. This event, which is considered the fiercest battle between the Asian countries, is going to take place after a four-year gap in the competition.

There will be a total of 6 teams battling it out against one another. There will be an Asia Cup match between Team India and Pakistan on August 28, 2022.

The Asian Cricket Council, or ACC, has announced the venue and schedule for the tournament. Here’s everything you need to know about the Asia Cup 2022 Match Dates, Team Players, Fixtures, and more.

It has finally been announced by the Asian Cricket Council that the schedule for the Asia Cup 2022 has been announced. In the T20 tournament, the countries will compete against each other at the venues determined by the ACC. As one of the major events for Cricket in Asian Countries, this cup is considered to be one of the most important.

As part of the India and Pakistan cricket schedules for the year 2022, the Asia Cup schedule is included. Later this year, Sri Lanka will host the Asia Cup 2022 But the venue is shifted to UAE, which will take place between 27 August and 11 September. The qualifiers for the same will take place from the 20th of August 2022 onwards.

The Asia Cup schedule has now been released for all teams that have been finalized, including Afghanistan, Bangladesh, India, Pakistan and Sri Lanka. For more information about a team’s schedule and fixtures, please select the team from the list below.

Asia Cup  2022 Schedule PDF – Match List, Date Time-Table @AsiaCup Point Table will be discussed here on this page. It was originally planned that Pakistan would host the Asia Cup in 2021, but later it was decided to host it in 2023.

You have the option to download the schedule in different formats for the 15th Asia Cup T20 tournament that will be held in 2022 by using these options. There are a number of PDF and other formats (including images and calendar exports i.e. iCal, Google Calendar) that Cricfacts.com provides to its customers.

A PDF of the Asia Cup timetable and full schedule for all T20 matches is now available for download. As of now, you are able to download the PDF file of the Asia Cup Schedule 2022 and access it offline when you are ready.

On October 22, the T20 World Cup 2022 in Australia will begin, which will help all participating teams prepare for it. In 2018, team India won the last Asia Cup, defeating Bangladesh in the final.
India is the most successful team in the tournament. India has won the Asia Cup title 7 times. Sri Lanka has won the tournament 5 times.

Sri Lanka has been selected to host the Asia Cup 2022 in UAE. During the Asian Cup, the following three stadiums will be used to host the matches between the Asian nations.

We have listed below the various Teams participating in Asia Cup 2022. The 15th Asia Cup will feature 6 Asian countries fighting for the trophy. Among these teams are India, Sri Lanka, Bangladesh, Pakistan, and Afghanistan.

A second group will join the competition after qualifying in the qualifier round.
The UAE, Kuwait, Singapore, and Hong Kong are the four groups that will compete against each other in the qualification round of the tournament. In the upcoming Asia Cup 2022, there will only be one group that will get a spot as the sixth group.

There is no doubt that India is the defending champion, as well as the most successful team when it comes to winning the event. Throughout the history of the Asia Cup, the men in blue have won seven times the Asia cup.

The second most successful winner of the Asia cup is Sri Lanka, which has won it five times in a row.
An exciting match took place in the last edition of the Asia Cup, in which India beat Bangladesh by 3 wickets. The following is a list of all winners of all Asia Cup events to date:

Due to the fact that the Asian Cup matches will be played as T20 Internationals (T20Is), the format of this year’s tournament is T20. Sri Lanka will host in (UAE) the tournament just a few months before the 2022 T20 World Cup, according to reports.

The Asia Cup 2022 is going to be hosted by Sri Lanka in UAE.

When is India vs Pakistan Match in Asia Cup 2022 Series? 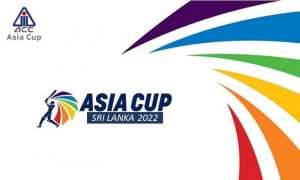 You can watch Asia Cup 2022 live Streaming on Star…